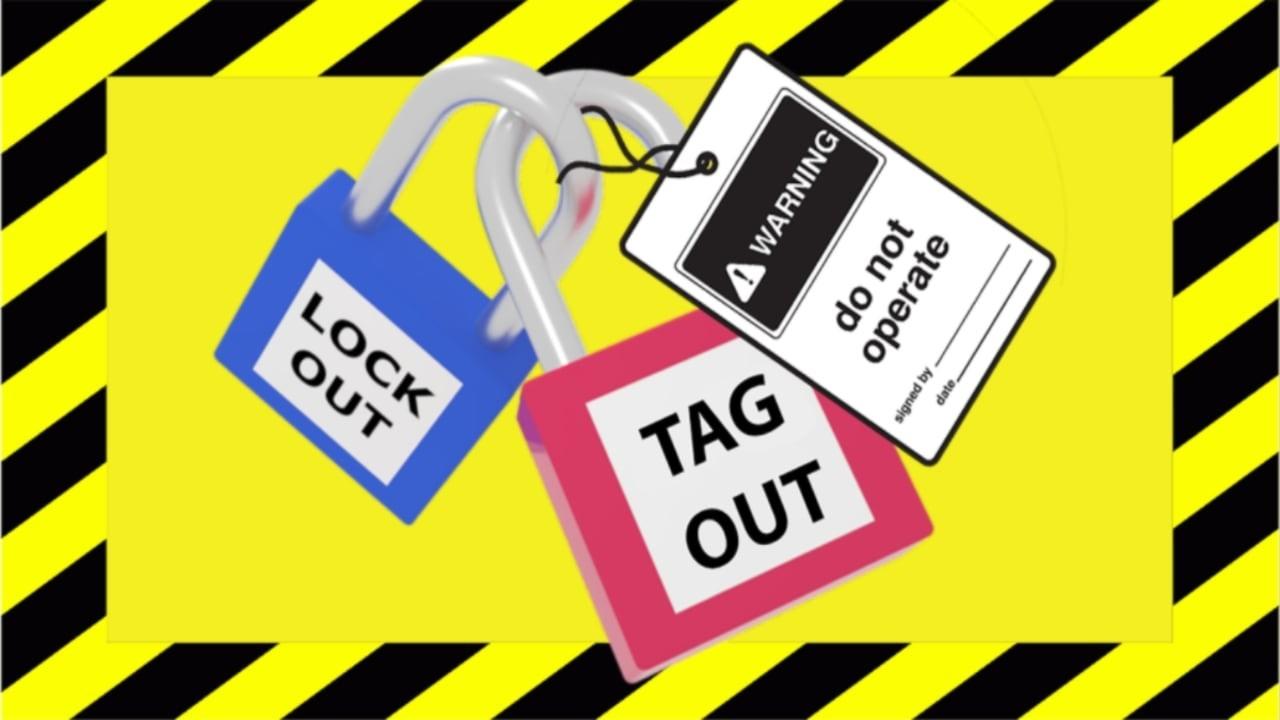 As stated by the Occupational Health and Safety Administration OSHA, Lockout Tagout or LOTO is a set of specific practices and procedures to safeguard employees from the unexpected energization or the release of hazardous energy from equipment during service or maintenance activities.

The purpose of Lock out tagout is to protect the worker from any physical injury while maintaining a machine.

To prevent the release of hazardous energy, it is imperative for the operator to isolate any machine and lock the energy isolating device from its power sources.

It is the process of applying a lockout device on an energy isolation device to prevent accidental activation. For example, a disconnect switch, circuit breaker or control valve may be kept locked while performing any associated work.

This ensures that the equipment cannot be activated until and unless the lock is removed.

Lockout devices should be robust enough to prevent accidental breakage or inadvertent activation of the energy isolating device.

Tagout means placing a prominent warning sign on the energy isolating device. This is done to warn others so that they do not accidentally energize the equipment.

The tagout device should warn about the hazards if the machine gets activated. It should display clear instructions of no operation or energization until the maintenance work is completed.

The lockout tagout devices should also be labeled to identify which employee is authorized to place or remove them.

Why Lockout/Tagout is crucial?

Compliance with the lockout/tagout standard prevents an estimated 120 fatalities and 50,000 injuries each year. Workers injured on the job from exposure to hazardous energy lose an average of 24 workdays for recuperation.
The unexpected startup of a machine, or a sudden release of any type of stored energy during maintenance work can result in catastrophic results for workers.
Thus, lockout tagout is necessary to ensure the safety of employees by preventing such incidents from occurring. 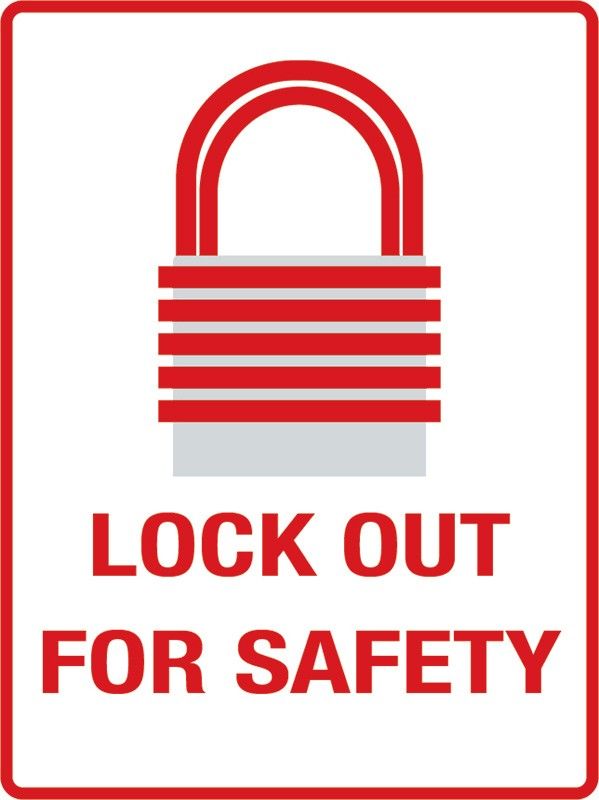 What is Hazardous Energy?

In industries, we refer to energy as anything which powers a machine, a process or a system.

Hazardous energy, however, can be defined as:

"any electrical, mechanical, hydraulic, pneumatic, chemical, nuclear, thermal, gravitational, or other energy that can harm personnel."

by University of Waterloo's

The type of hazardous energy that a worker can be exposed to varies according to the industry, but accidental exposure to any one of them can cause serious bodily harm or even death. 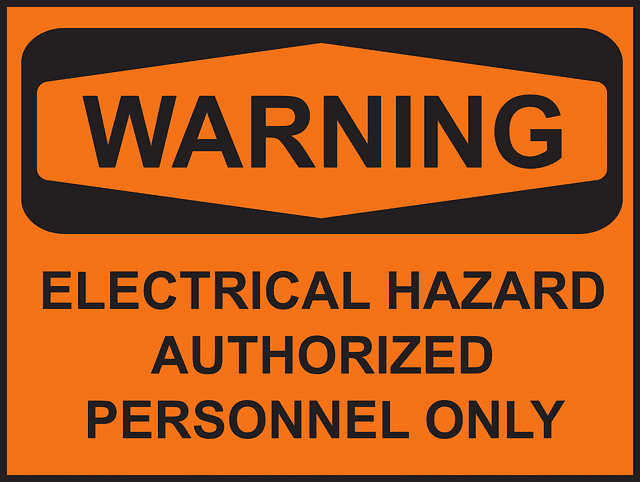 Injuries due to electric shock are very common in industries.

Accidental movement of a rotating, cutting or crushing machine can be hazardous to the workers which may result in amputation or puncturing of body parts.

It is the energy stored in compressed liquids, hydraulic machines are capable of exerting a great amount of force which is sufficient to crush a worker.

It can be found in machines or systems which are operated using high air pressure. It is a safe practice to release the built-up air pressure before initiating any sort of maintenance work on the machines.

A process having chemical reactions will have chemical energy, such as combustion of gases.

This is the energy released from a heat source, such as boilers or furnaces, which can cause burn injuries.

The OSHA standard for The Control of Hazardous Energy (Lockout/Tagout), Title 29 Code of Federal Regulations (CFR) Part 1910.147, discusses the methods and procedures required to deactivate machinery or equipment so that the release of hazardous energy may be prevented during maintenance or service work.

It discusses the requirements to protect employees working on electric circuits and equipment. It also stresses the need for safe work practices including lockout/tagout procedure.

This standard applies to employees who are at risk of direct or indirect electric shocks such as working on or near electric conductors.

The Canadian Standards Association's standard CSA Z460, discusses the necessary requirements for controlling hazardous energy associated with harmful machines and equipment. It also outlines the procedures of a lockout/tagout program and is also considered as a suitable standard for lockout practices.

OSHA has listed some pre-defined steps to perform the lockout procedure which are as follows:

1. Notification: All the employees working nearby should be informed that maintenance work is scheduled and the equipment needs to be powered off and locked out.

2. Identification: An authorized person may identify the type and magnitude of the energy which powers the machine. The relevant person must also identify the potential hazards of that energy along with the methods to control it.

3. Shutting down: The equipment or machine will be shut down using its standard operating procedures such as switching off, pressing a button or closing a valve.

4. De-activation: Energy isolating devices are de-activated to completely isolate the machine from its energy source.

5. Locking out: The energy isolating devices are locked with their respective locking devices.

This energy must be dissipated or drained by methods such as grounding, repositioning, blocking or bleeding down.

7. Verification: The isolation of equipment is verified by trying to operate it using its normal operating procedure such as ON button. Inspection is also done to make sure that equipment has been properly isolated from its energy source.

8. The machine or equipment has now been properly locked in compliance with OSHA standards.

It should also be noted that a tagout device will also be placed along the lockout device. In such a case where the energy isolating device does not have provisions for locking out, then a tagout will be necessary. 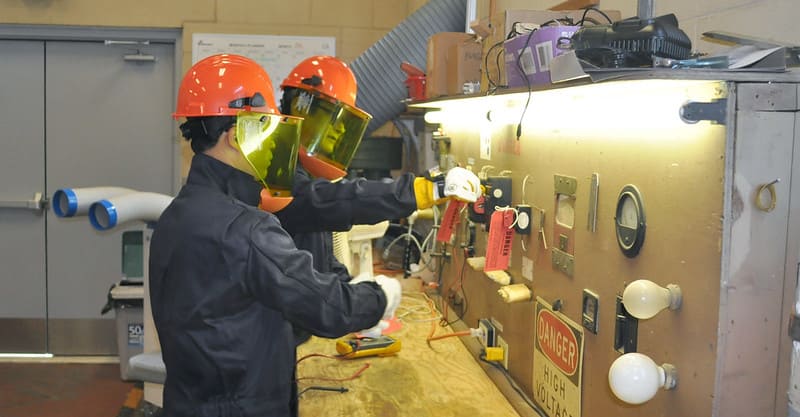 “ Lockout / tagout procedure”, by NAVFAC , is licensed under CC BY 2.0

Employers must ensure that their workers are aware about the purpose and functions of Lockout/tagout. They should have the knowledge and skills to safely apply lockout/tagout procedures.

OSHA has set three levels of trainings for different employees which are as follows:

1. Authorized employees: They are the ones who perform maintenance work and isolation procedures. They should be trained to analyze the risks and identify the type and intensity of hazardous energy involved. Safe implementation of lockout/tagout procedures essentially depend on their knowledge.

2. Affected employees: They are machine operators or people who are working in the area where maintenance work is being done.

They should be trained enough to be able to recognize when a lockout/tagout procedure is being performed. No intervention should be allowed by the personnel once the equipment has been locked or tagged off.

3. Other employees: They are those employees who are present in the area where lockout/tagout is being implemented. They should be prohibited to remove a lockout/tagout device and must not attempt to re-energize or operate the machinery.