Published Date: Sep 18, 2020 Last updated: October 1, 2021)
Work in rural, urban, or any other location, have a look around yourself and you will realize that power lines are part of the globe as they are almost everywhere. Either it is a wooden pole supplying power to the local consumers or big towers delivering high voltages, the significant hazard is present everywhere for the electricians as well as common people. All of us must be alert of the hazards we face and measures we can take to guarantee our complete safety. Linemen may be well aware of the associated hazards but other people who are exposed to power lines are usually not well taught. This piece of writing will discover such hazards and explain elementary safety actions.

What are High Voltage Transmission Lines?

Transmission lines or overhead Power Lines transmit electricity from the generating stations to other places such as large industries or to distribution networks from where the electricity is further supplied to different consumers. Step-up transformers are used at the generation end to increase the voltage level of transmission.

According to ANSI, transmission lines can be categorized based on different voltage levels as:

A Transmission tower consists of the following constructional parts: 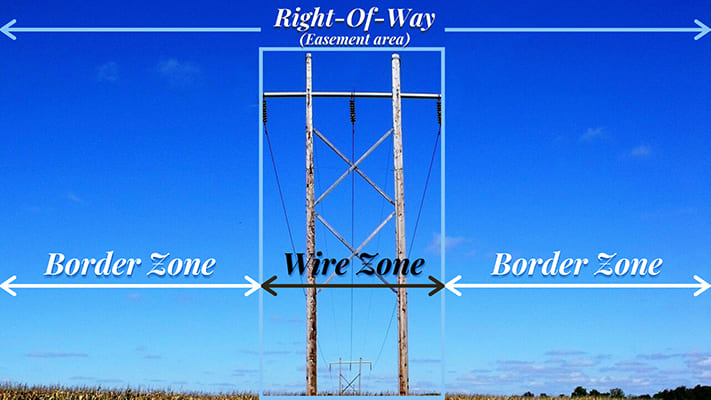 There are a number of hazards related to high voltage power lines. Electricity can be very dangerous for surrounding. The dangers are as follows:

The concern for health hazards related to overhead power lines was first raised in 1979. In this study, it was discussed that electromagnetic radiations emitting from powerlines can cause childhood leukemia. Some researches stated that power lines can cause cancer and other critical health problems and the closer we get to HV overhead lines, the more dangerous the electromagnetic radiations become.

According to the research of the World Health Organization, we can suffer from insomnia, anxiety, headache, skin burns, fatigue, and muscle pain because of radiations from HV power lines. If such conditions really do occur, then electromagnetic radiations can be prevented from entering the human body by providing adequate shielding using metal. Things like buildings, trees, etc. can also serve as shielding for this purpose. In this way, we can reduce the health hazards caused by these dangerous radiations.

However, contrary to this belief, there are several arguments by experts stating that power lines create no such health hazards at all. In 1995 APS (American Physical Society) rejected linking childhood leukemia with power lines as there was no evidence that whether power lines caused it or rather it was just a coincidence. National Institute of Environmental Health Sciences (NIEHS) reported in 1999 that there is no such evidence to prove any health hazards of power lines nor their safety.

We can conclude that there is no known health hazard related to living near HV power lines but also science has not proven power lines as completely risk free. Scientists are still doing various research over this argument to make the environment safer.

Electric shock occurs when current passes through the human body when coming in contact with an energized conductor. Damage caused by electric shock depends on the severity of the shock or can say it depends on the level of voltage of the shock. It can cause skin burns and, in some cases, can lead to internal injuries or even death.

Arcing can be defined as dangerous conditions related to the release of energy due to electric arc. It occurs when accidentally a conductive object or body comes too close with the highly energized conductor causing an arc to produce at the points of contact. It can cause serious skin burns due to direct heat exposure.
We have also written an article on Safety First! Things to Keep in Mind to Prevent Arc Flash Hazards, have a look at it, and give your valuable comments.

Step potential is created when a fault occurs in power lines and current from the conductor starts to flow towards the earth. The voltage level of the area surrounding the grounding point is not uniform due to non-uniformity in resistivity of soil, so a potential difference is created there.

A person entering the vicinity of grounding has the difference of voltage between the two steps and thus due to potential difference current enters the body through the foot which is at higher potential and leaves through the other. This is known as step potential.

Touch potential is defined as the difference in the voltage level of a person's feet and the energized equipment. If the person accidentally touches that energized body, then-current enters his body due to a potential difference.

Proven expertise of our certified professional engineers will aid in the evaluation of your system and deliver state-of-the-art grounding solutions for your power system's protection.

There are some precautions which must be followed to avoid electrical hazards and risks:

Besides the precautions, there are also some safety rules for the linemen who work on HV transmission lines. These areas following:

There is another blog that we wrote on OSHA safety measures to protect workers, you may also check out it to grab more information about the safety of linemen.

Electricity is a great blessing for us as it has advanced and automated our life to an infinite extent. But along with these benefits, electricity is also very dangerous at the same time. It creates a number of hazards and health issues thus endangering our life. If we properly follow the safety rules, standards, and precautions, then we can reduce and even eliminate the risks and hazards caused by electricity. Conclusively, it's up to us that either we make our life comfortable or full of risks.