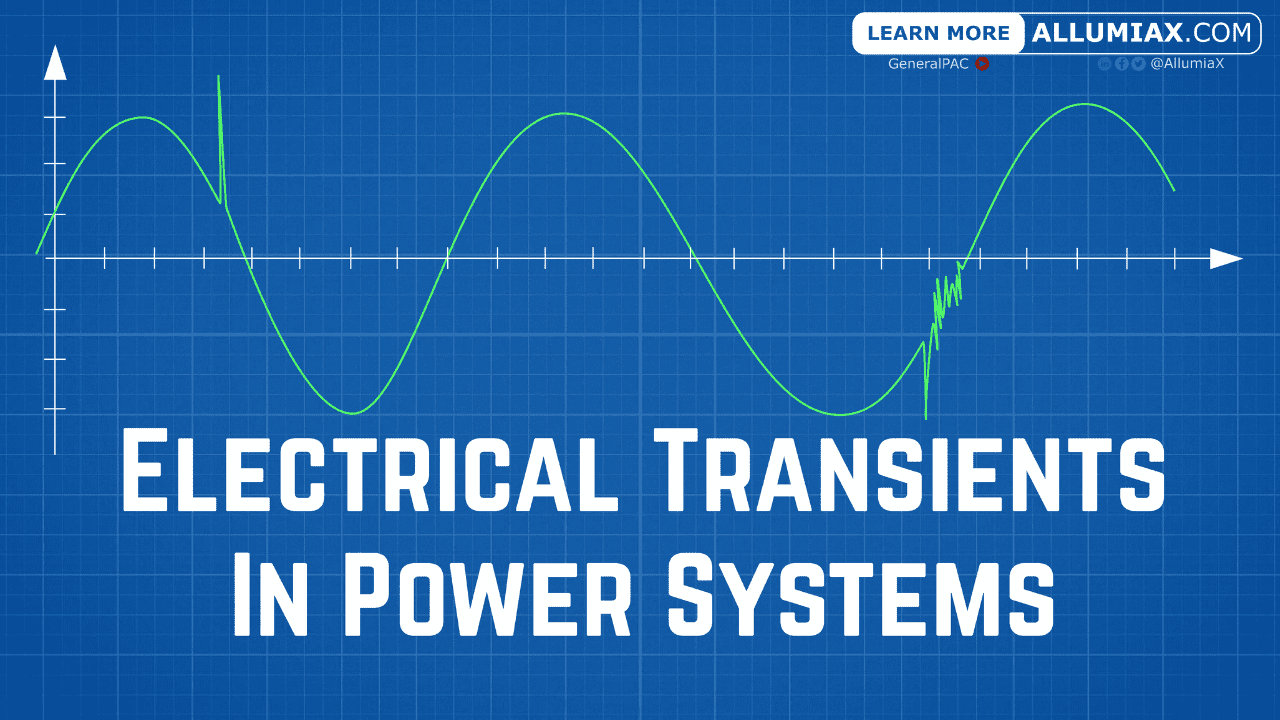 Electrical transients can occur in power systems from a variety of sources and have adverse effects on the equipment and reliability of the power system. It is best to know about the possible sources in your facility and to protect against it. Read on to find out more about power system transients.

You may have heard of the word transient before, meaning something that lasts for a very short period, but when it comes to electrical power systems, transients are that, and much more.

We just launched our Power Systems Engineering Vlog series and right now, we have a great deal for you. The first 50 members who join our Vlog community will get a 75% OFF. This offer is valid till May, 15th. What are you waiting for? Signup Now.

What are Electrical Transients?

The sudden and short-lived surges of energy induced in power or data and communication lines in a utility or any facility are known as electrical transients.

They have the characteristic of extremely high voltages that drive large amounts of current in an electrical circuit, lasting from less than a microsecond to several milliseconds. Consequently, the system goes from a stable state to a momentary disturbed state and back again. The stable condition after the transient has died down is also called the steady-state condition.

Most electrical transients are not of large magnitude but are still critical because of their effect on the performance of circuits and interrupting or protective devices.

Transients in power systems follow the path of least resistance to the ground and may heat up circuit components and semiconductor devices causing malfunction and failure. Also, an appreciable number of these electrical transients are of sufficient magnitude to cause the insulation breakdown of the equipment in the power system.

The adverse conditions during a transient can be very damaging to power system protection equipment and switchgear. Their effect on devices varies depending on the device itself and its location on the power system.

Therefore, power system engineers always devise ways and means to limit the magnitude of the transients produced and to control their effects on the operating equipment.

Causes of Transients in Power Systems

Transients in a power system can occur spontaneously and untimely, however, all the ways and sources that transients can originate from can be classified as either internal or external sources.

An electrical system or facility consists of many different components and devices, both, inside the facility and outside of the utility grid. Inside the facility, inductive components such as transformers and motors can generate transient voltages in electrical systems. When current flow is disrupted in these devices, the magnetic field collapses resulting in voltage impulses or transients. Several factors such as the location of the transient in the system, the size of the source, time interval and rise time, the effect on nearby equipment, and configuration of the electrical system, determine the overall effect of these electrical transients. Several sources of transient voltages within a facility are presented in the following list:

Internal sources do not produce surges of large magnitude. Experience shows that transients due to internal sources hardly increase the system voltage to twice the normal value.

Several sources of transient voltages which are present external to a facility are:

According to a definition provided by the IEEE 1159-2019 standard, there are two types of transients: impulsive and oscillatory.

Conversely, a sudden and non-power frequency change in the voltage or current or both, which is bidirectional in polarity, is classified as an oscillatory transient. An example cause may be a capacitor bank energizing or a cable switching.

The Nature of Transients in Power Systems

Transient voltages typically last from less than a microsecond to several milliseconds.

Depending on where they occur in the power system, transients can be divided into two types.

If the transient occurs between any two power or signal conductors, it is called a normal-mode transient.

If it occurs equally between and in phase from each power or signal conductor to the ground, it is called a common-mode transient.

Damage to equipment can be caused by transients in several ways, including dielectric breakdown, electrical flashover, fracture, thermal and instantaneous peak power overloads, and surpassing dV/dt and dI/dt limits.

Transients can also cause the dielectric material to become electrically conductive if it is of a high enough magnitude. In the case of air being the dielectric, such as the physical separation of two conductive mediums at two different voltage potentials, the dielectric breakdown is generally referred to as electrical flashover (or arc flash). Electrical stresses associated with voltage transients are converted into mechanical energy, resulting in a fracturing of component materials at microscopic as well as macroscopic levels.

Transients also produce thermal energy, adversely altering the insulation material at a molecular level. The rate of voltage and current changes associated with transients also plays an important role in the impact these stresses can produce in exposed materials and components.

The Effects of Electrical Transients

The influence of voltage transients on electronic equipment generally falls into one of four categories:

Intermittent interruption is when a transient event is injected into a data or control network, resulting in lost or corrupted data. This may result in a load or device locking up, tripping off, or operating improperly.

Chronic degradation may occur when repetitive transient events diminish the integrity and reliability of an exposed component. Over the period of days, weeks, or even months–the cumulative effect of transient voltages leads to the eventual inoperability of the vulnerable component. Because the transient voltages are frequent and relatively consistent in this case, locating their source is possible.

Latent failures are similar to chronic degradation, except that they are caused by a significant transient event that damages components, but not to the point that the component cannot perform its intended function. Over a period of time–again, days, weeks, or even months–the ordinary stresses due to normal operation result in the component’s inoperability. This type of mode is more difficult to troubleshoot because the root cause of the failure may have occurred at an indeterminate time in the past.

Catastrophic failures due to transient voltages identified and detected easily since the affected component or device stops to function properly almost immediately and even the damage might be visible. In this case, the transient’s voltage peak magnitude or rate of rising exceeds the rated threshold of the component, in such a manner as to create a permanent open circuit or short circuit within the component. The odds of correlating the component failure with a power system disturbance are usually better with this type of event.

It has been shown that transient voltages can interfere with the normal operation of equipment resulting in erratic behavior and the diminished quality of the end-product. Furthermore, interruptions in continuous manufacturing processes can result in revenue losses due to production downtime.

Transients or surges on the power system may originate due to switching or other causes, but the most important and dangerous surges are those caused by lightning. Commonly used devices for protection against lightning surges are:

The earthing screen and ground wires cannot provide protection to equipment from surges that may reach the equipment terminals. This is where a lightning arrester is used. A lightning arrester works by conducting the high voltage surge to the ground. It consists of a spark gap in series with a non-linear resistor. It is connected in parallel to the device which it is supposed to protect, i.e., between line and ground. The length of the gap is so set that normal line voltage is not enough to cause an arc across the gap, but a dangerously high voltage will break down the air insulation and form an arc. The property of the non-linear resistance is that its resistance decreases as the voltage (or current) increases and vice-versa. 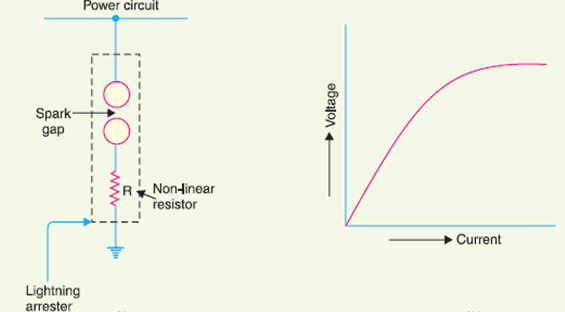 To learn more about devices which protect against transients and surges, follow our blog written on Surge Protection Devices

Among these, studies concerned with electromagnetic transients are probably the most complicated ones.

It is crucial to understand transient phenomena in electric power systems and the impact of resulting disturbances for reliable power system operation and resilience. For this purpose, power system engineers use the numerical analysis tool, Alternative Transients Program- Electromagnetic Transients Program (ATP-EMTP). This tool is widely used to recognize and solve transient problems in power networks and components.

ATP-EMTP is a universal program system for digital simulation of transient phenomena of electromagnetic as well as electromechanical nature. With this, complex networks and control systems of arbitrary structure can be simulated. It has extensive modeling capabilities and additional important features besides the computation of transients. It has been continuously improved by contributions from international groups and bodies over the past 20 years.

Thanks to its accuracy, rapidity, and user-friendly interface, EMTP is used worldwide as a reference tool by the main actors of the power system industry (utilities, companies, and consultants) for projects, design, and engineering or to solve problems and unexplained failures. It has become a de facto standard in the industry because of its capability to efficiently and quickly perform simulation of very large power systems, its numerical robustness, and the stability of the simulation engine.

A Transient Stability Study is a two-stage process comprising of:

The concerned power system under consideration is critically analyzed and modeled using an Electromagnetic Transients Program (EMTP) to discover the root cause of transient disturbance and once identified, a ‘worst-case scenario’ is simulated in the program. Key parameters of the transient disturbance such as its magnitude, rate of rise, duration, frequency, and energy are extracted from the simulation.

A suitable mitigation scheme is selected and designed, according to the parameters extracted from the simulation and the characteristic frequency response of the system under consideration, in order to provide the best all-round solution for the reduction of transients to a safe level.

AllumiaX, LLC provides transient stability studies. Some of the mitigation schemes AllumiaX, LLC has expertise in, incorporate snubbers and surge arresters as transient suppressors. Click to find out more and get a quote for your facility

The software uses the trapezoidal rule of integration to solve the differential equations of system components in the time domain.

To cater non-zero initial conditions, either automatically a steady-state, phasor solution is carried out or they can be entered by the user for simpler components.

The program also offers interfacing capability to the modules such as the Transient Analysis of Control Systems and MODELS (a simulation language) enables modeling of control systems and components with nonlinear characteristics such as arcs and corona.

Disturbances are allowed, symmetric or asymmetric, such as lightning surges, faults, or any kind of switching operations.

Transients can occur either naturally or are caused by device operation within a facility, but in any case, are inevitable. It is therefore important to model a facility, keeping in view such occurrences, and to install transient protection devices after having conducted a detailed study of the facility using transient analysis software for a reliable and safe power system.